Scalzi was born in May 10, 1969 in California. Scalzi’s books are known for their humor. His style of writing has been influenced by Robert Heinlein (eg. Starship Troopers) and Joe Haldeman (eg. The Forever War) which are both masters and celebrities of the scifi genre. John was also the elected president of the Science Fiction and Fantasy Writers of America organization. 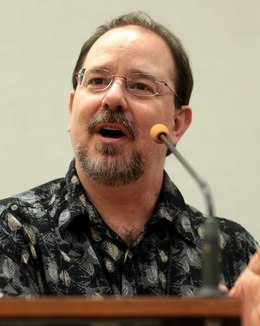 John Perry, a 75-year-old, joins the Colonial Defense Forces (CDF) who protect human interplanetary colonists. Volunteers sign letters of intent and provide DNA samples at the age of 65. John and his recently deceased wife had both done so. After visiting his wife’s grave to say goodbyeh, Perry takes a space elevator called “Beanstalk” to the CDF ship Henry Hudson, where he meets fellow male and female retiree volunteers. They call themselves the “Old Farts”. 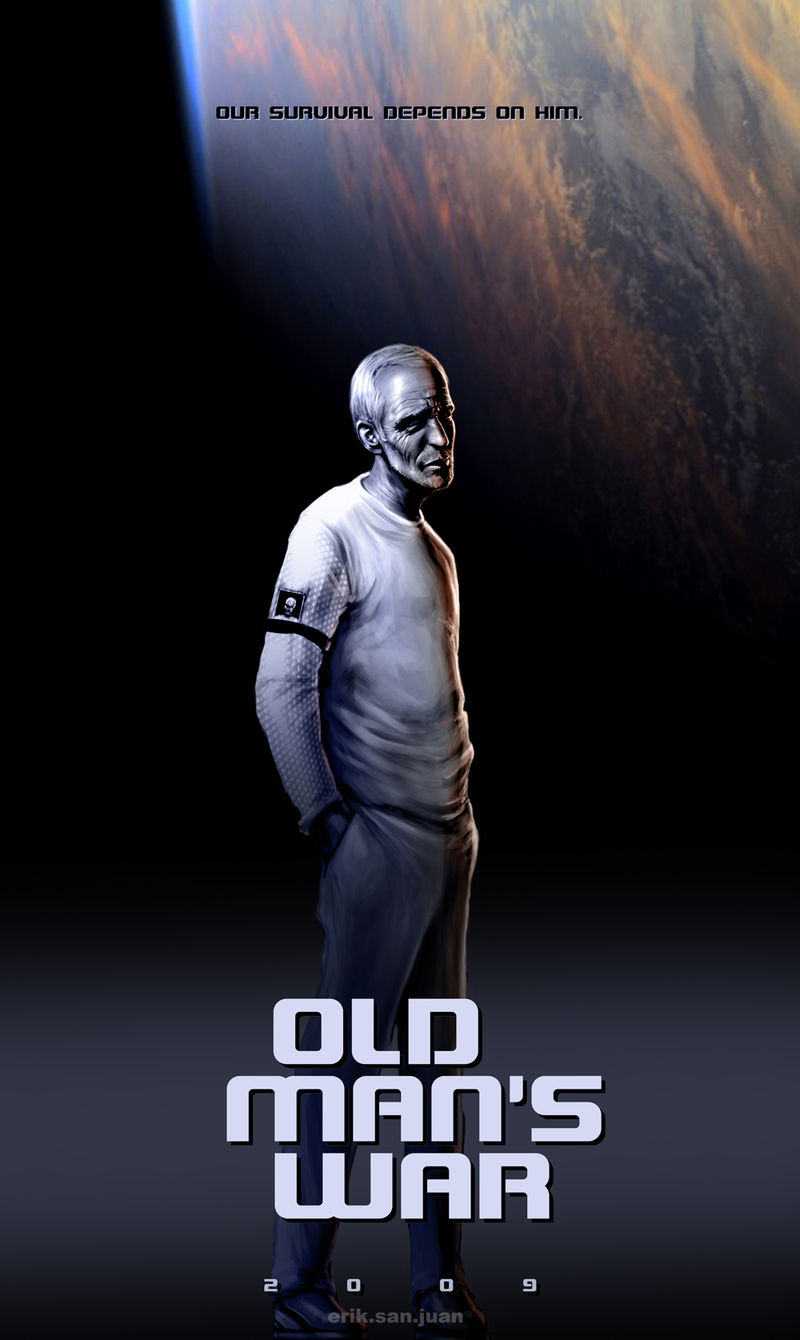 Perry’s mind is transferred to a new body based on his genetic code. The new body is a younger version of himself, but genetically improved with enhanced musculature, green skin, and yellow cat-like eyes. He now possesses more strength, nanobot-enhanced artificial blood, better eyesight and most critically, the BrainPal - a neural interface that allows owners to communicate with other members of the CDF via thought.

Now a veteran, Perry participates in the Battle for Coral. The planet contains reefs valuable to the attacking Rraey, as well as a human colony. Perry is grievously wounded but and the lone survivor of the battle. He is left for dead by a Rraey search party and later rescued by members of the mysterious “Ghost Brigades”, the Special Forces units of the CDF. Perry thinks he has died when he sees a younger green version of his deceased wife Kathy, who in reality is Jane Sagan, the leader of the Ghost Brigades rescue team. 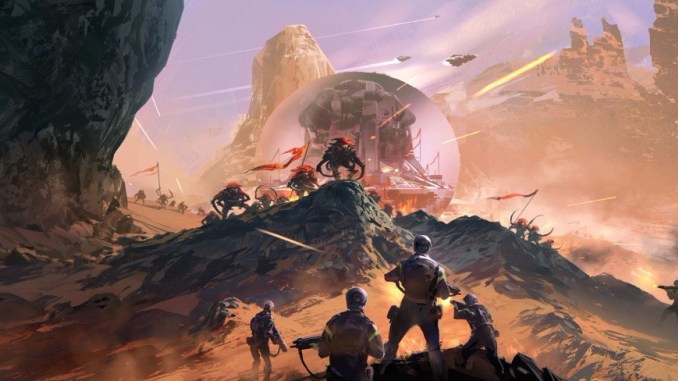 Later it turns out that Sagan has been grown based on Kathy Perry’s DNA, as legally allowed by her letter of intent. Unlike John, Segan has no memories of Kathy’s life. She is eager to learn about Kathy, “realborn” people and what kind of life one can have outside the CDF.

Sagan has John join the Ghost Brigate in an advisory role to gather information from the Consun. Perry discovers that the Rraey had received tachyon detection technology from the Consu, which was used to set up the ambush at the battle of Coral.

Perry and Sagan participate in a Special Forces operation to capture or destroy the borrowed Consu technology in advance of a major attack to recapture Coral from the Rraey. Perry is instrumental in the successful outcome of the battle by capturing the technical manual for the Consu detection system. He is saving Sagan’s life after she is severely wounded. He never sees her again after delivering her to a shuttle which returns her to the secretive Ghost Brigades.

At the conclusion of the book, Perry is promoted to captain following his success at Coral and holds hope of meeting with Sagan again when their terms of service conclude.

How to prepare for battle.

First, systems check your MP-35 Infantry Rifle. This is the easy part; MP-35s are self-monitoring and self-repairing, and can, in a pinch, use material from an ammunition block as raw material to fix a malfunction. Just about the only way you can permanently ruin an Empee is to place it in the path of a firing maneuvering thruster. Inasmuch as you’re likely to be attached to your weapon at the time, if this is the case, you have other problems to worry about.

Second, put on your war suit. This is the standard self-sealing body-length unitard that covers everything but the face. The unitard is designed to let you forget about your body for the length of the battle. The “fabric” of organized nanobots lets in light for photosynthesis and regulates heat; stand on an artic floe or a Saharan sand dune and the only difference your body notes is the visual change in scenery. If you somehow manage to sweat, your unitard wicks it away, filters it and stores the water until you can transfer it to a canteen. You can deal with urine this way too. Defecating in your unitard is generally not recommended.

Get a bullet in your gut (or anywhere else), and the unitard stiffens at the point of impact and transfers the energy across the surface of the suit, rather than allowing the bullet to burrow through. This is massively painful but better than letting a bullet ricochet merrily through your intestines. This only works up to a point, alas, so avoiding enemy fire is still the order of the day.

Add your belt, which includes your combat knife, your multipurpose tool, which is what a Swiss army knife wants to be when it grows up, an impressively collapsible personal shelter, your canteen, a week’s worth of energy wafers, and three slots for ammo blocks. Smear your face with a nanobot-laden cream that interfaces with your unitard to share environmental information. Switch on your camouflage. Try to find yourself in the mirror.

Third, open a BrainPal channel to the rest of your squad and leave it open until you return to the ship or you die. I thought I was pretty smart to think of this in boot camp but it turns out to be one of the holiest of unofficial rules during the heat of battle. BrainPal communication means no unclear commands or signals – and no speaking to give away your position. If you hear a CDF soldier during the heat of battle, it’s because he is either stupid or screaming because he’s been shot.

The only drawback to BrainPal communication is that your BrainPal can also send emotional information if you’re not paying attention. This can be distracting if you suddenly feel like your going to piss yourself in fright, only to realize it’s not you who’s about to cut loose on the bladder, but your squadmate. It’s also something none of your squadmates will ever let you live down.

Link only to your squadmates – try to keep a channel open to your entire platoon and suddenly 60 people are cursing, fighting and dying inside your head. You do not need this.

Finally, forget everything except to follow orders, kill anything that’s not human and stay alive. The CDF makes it simple to do this; for the first two years of service, every soldier is infantry, no matter if you were a janitor or surgeon, senator or street bum in your previous life. If you make it through the first two years, then you get the chance to specialize, to earn a permanent colonial billet instead of wander from battle to battle, and to fill in the niche and support roles every military body has. But for two years, all you have to do is go where they tell you, stay behind your rifle and kill and not be killed. It’s simple, but simple isn’t the same as easy.

Old Man’s War belongs to the military science fiction genre but adds the topics of the ethics of life, marriage, friendship, the significance of mortality and what makes a human. The ethics of aging is outlined in the beginning of the book with society having a way to reverse the effects. Marriage is explored in the continued love of John for his dead wife Jane. When it comes to the identiy of what makes a human it is left to the reader to decide at the end of the novel about John and if he can still be considered a human being despite his altered genetic code and the enhancement he received by the CDF.

Old Man’s War is a conscious homage to Robert Heinlein’s Starship Troopers. He wanted to make the story in a way that the reader can understand the events of the book - such as being in a war or moving on after losing someone you love.