Robert A. Heinlein was born in July 1907 in Missouri and died in May 1988 aged 80 years. He was a science-fiction author, aeronautical engineer, and retired navy officer. He fought aboard an aircraft carrier during Wold War II and this time is considered to have had a strong influence on his writing.

He is the pioneer of hard science fiction, a sub genre which emphasizes scentific accuracy. His work continues to have an influence on the science-fiction genre, and on modern culture more generally. Heinlein repeatedly addressed social themes in his science-fiction stories. The importance of liberty and self-reliance, the individuals obligation to societies or societies repression of nonconfrom thoughts. 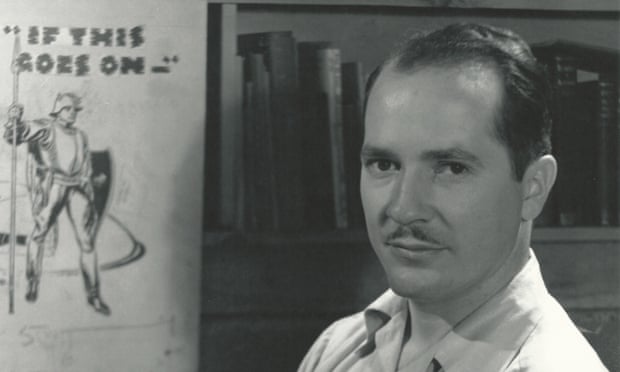 Heinlein was named the Science Fiction Grand Master in 1974 and won many awards during his career. In his books he predicted later inventions like the cell phone or computer aided design. Robert also coined terms that have become part of the English language. “There ain’t no such thing as a free lunch” or “Space Marine” are commonly used even by the President of the United States.

Let’s take a look at his most famous book. This is one of my personal all time favorite reads.

The future society of Earth is ruled by the Terran Federation, a global government dominated by the military elite. The rights of a “full citizen” are not universally granted, but must be earned through Federal Service. Only “full citizens” can vote or hold a public office. At the age of 18 people of either gender are expected to enlist in the Terran Federation. This structure arose ad hoc after the collapse of the 20th century Western democracies.

Two alien civilizations are known. The “Skinnies” a humanoide species with thin appearance. And the “Arachnids” or “Bugs” an insectoid species and main antagonists of the story. The Bugs have multiple castes; workers, soldiers, brains, and queens and their society is similar to ants and termites. The Skinnies are initially allies of the Arachnids, but switch to being allies of the humans midway through the novel. Faster than light travel exists in the novel. 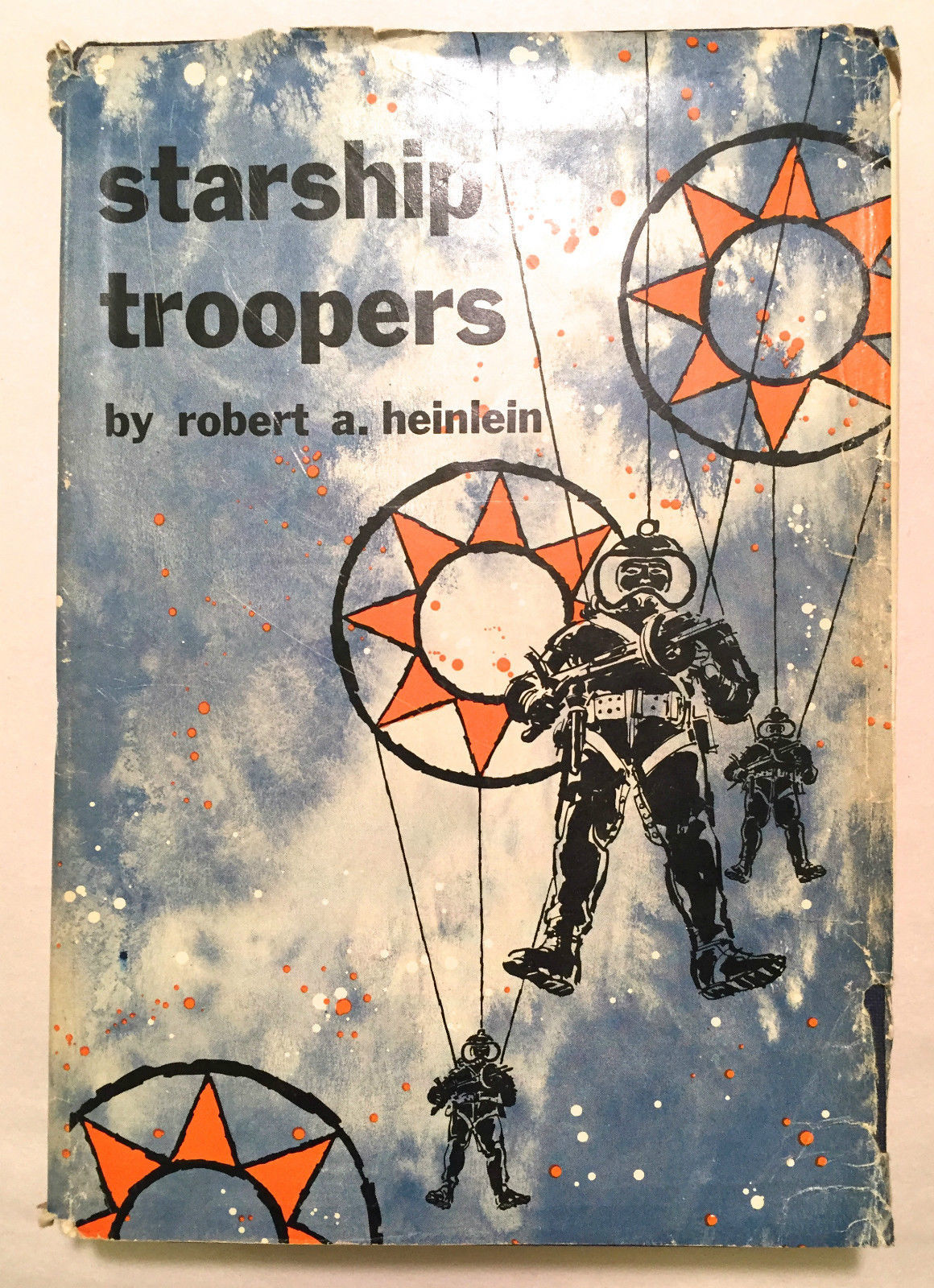 Starship Troopers main character is Johnny Rico a member of the TF Mobile Infrantry. Rico is from a wealthy family, whose members did not serve in the army and see the military drive society critical.

The story is loosened up by a series of flashbacks into Rico’s time at school.

The novel opens with Rico aboard the corvette Rodger Young, platoon transport for the “Rasczak’s Roughnecks”, about to embark on a raid against the planet of the “Skinnies”, allies of the Arachnids. The raid is relatively brief: the platoon lands on the planet, destroys its targets, and retreats, suffering two casualties in the process. The story then flashes back to Rico’s graduation from high school and his decision to not attend Harvard University, but rather sign up for Federal Service, despite the objections of his wealthy father. This chapter is mostly monologues of two people: retired Lt. Colonel Jean V. Dubois, Rico’s school instructor in the subjects of History and Moral Philosophy, and Fleet Sergeant Ho, a recruiter for the Armed forces of the Terran Federation.

Dubois delivers one of the famous statements of the book on how Violence “has settled more issues in history than has any other factor”.

Rico is assigned to the Mobile Infantry, and moves to Camp Arthur Currie for his training under Sergeant Charles Zim. He receives combat training of all types, including simulated fights in armored suits. During his training a Arachnid attack destroys the city of Buenos Aires, Rico’s mother is killed in the attack. The “Bug War” changes from border skirmishes to a full-scale war. His first assignment is the Battle of Klendathu, an attack on the Arachnid’s home world, which turns into a disastrous defeat for the Terran Federation with many casualties. With his unit decimated, he is assigned to the “Razak’s Roughnecks” onboard the TF Rodger Young.

Several battles with the Arachnids follow and Rico is promoted to corporal and later lieutenant. In the final battle of the book, Rico commands a platoon during “Operation Royalty”, a raid to capture members of the Arachnid brain caste and queens. This operation is a success and a “Brain Bug” is captured. The novel ends with his platoon renaming to “Rico’s Roughnecks”.

“There are no dangerous weapons; there are only dangerous men.”

“Liberty is never unalienable; it must be redeemed regularly with the blood of patriots or it always vanishes. Of all the so-called natural human rights that have ever been invented, liberty is least likely to be cheap and is never free of cost.”

“Happiness consists in getting enough sleep. Just that, nothing more.” 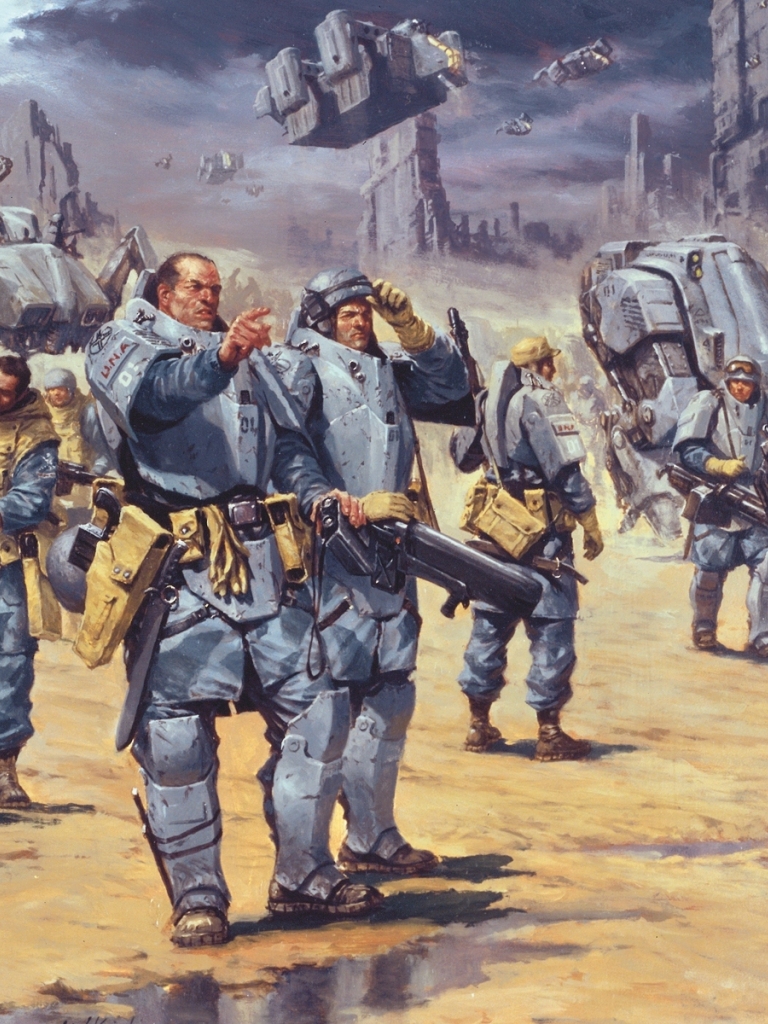 “Our behavior is different. How often have you seen a headline like this?–TWO DIE ATTEMPTING RESCUE OF DROWNING CHILD. If a man gets lost in the mountains, hundreds will search and often two or three searchers are killed. But the next time somebody gets lost just as many volunteers turn out. Poor arithmetic, but very human. It runs through all our folklore, all human religions, all our literature–a racial conviction that when one human needs rescue, others should not count the price.”

“Any group is weaker than a man alone unless they are perfectly trained to work together.”

“To permit irresponsible authority is to sell disaster.”

Commentators have stated that Starship Troopers is not driven by its plot, it contains only few desciptions of military combat. Instead much of the novel’s content is the discussion of ideas. The book is based on the social Darwinist idea of society as a struggle for survival based on military strength. It suggests that some conflicts must be resolved by force: one of the lessons Rico is repeatedly taught is that violence can be an effective method of settling conflict.

Ricos transformation from boy to soldier is another major theme and the book can be considered a “coming of age” novel.

Heinlein also ridicules the idea of inalienable rights, such as “Life, Liberty, and the Pursuit of Happiness”, arguing that people only have the rights that they are willing to fight and die for to protect.

Critics of the book and the author accused him of glorification of militarism and facism. To me those allegations are refuted by the satirical undertone of the book.

Starship Troopers has been influential for the sci-fi genre and praised by reviewers for its scenes of training and combat and its visualization of a future militaristic society.